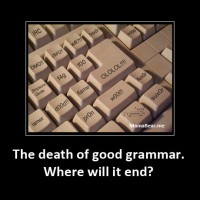 ps – speaking about bad grammar, have you seen: 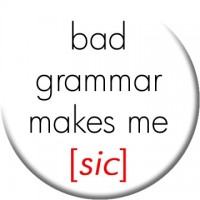 You know, if there's one thing MamaBear hates more than 97 mooses shedding their glistening white guard hairs all over her black karate pants, it's an empty coffee cup.

Nope indeed, instead, I will regale you with what really frosts my petunias bigtime:

Teens whose command of the English language would make a moldy sock sound like Shakespeare.

As the unofficial karate mom and MamaBear of my dojo, I'm in the Facebook network of bunches of teens (heck, HD1 and HD2's friends often contact me as well!).

And what I read makes me just shake my head at how kids these days manage to pass the gut-wrenching curriculum "See Dick.  See Dick Run!  Run, Dick, Run!" (oh for those halcyon days of early reader books like:

and my soul fills with agony and the heavens weep and I say to myself:

With that as a thrillingly maddening opening, allow me to present:

Stupid Grammar Mistake #5 – "You can't loose if you accept me!"

Unless you tie me *real* tight….

Stupid Grammar Mistake #4 – "Don't forget to accept my sister to!"

Oops, did I digress yet again?

Stupid Grammar Mistake #3 – "Your going to be so happy when I gift your University with my million dollars!"

Not only is your going, but your sanity and your happiness and your peace of mind too!

Stupid Grammar Mistake #2 – "I love your Greek system – their so cool!"

Stupid Grammar Mistake #1 – "Ur gunna love me at your college!"

Given that Ur kinda sorta doesn't exist…

… Ur (Sumerian: Urim;  Sumerian Cuneiform: Ur  was an important city-state in ancient Sumer located at the site of modern Tell el-Muqayyar in Iraq's Dhi Qar Governorate.  Once a coastal city near the mouth of the Euphrates on the Persian Gulf, Ur is now well inland, south of the Euphrates on its right bank, 16 kilometres (9.9 mi) from Nasiriyah.

The city's patron deity was Nanna, the Sumerian moon god, and the name of the city is in origin derived from the god's name, URIM2KI being the classical Sumerian spelling of LAK-32.  , literally "the abode (UNUG) of Nanna (LAK-32)".

The site is marked by the ruins of the Great Ziggurat of Ur, which contained the shrine of Nanna, excavated in the 1930s. The temple was built in the 21st century BC (short chronology), during the reign of Ur-Nammu and was reconstructed in the 6th century BC by Nabonidus. The ruins cover an area of 1,200 metres (3,900 ft) northwest to southeast by 800 metres (2,600 ft) northeast to southwest and rise up to about 20 metres (66 ft) above the present plain level…MORE….

Do yourself a favor.

Make sure your kids talk gooder than everyone else.

The colleges will thank you for it.