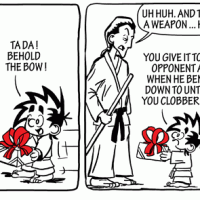 So many great things you can do with a bo….

Click on the comic above to see it all! 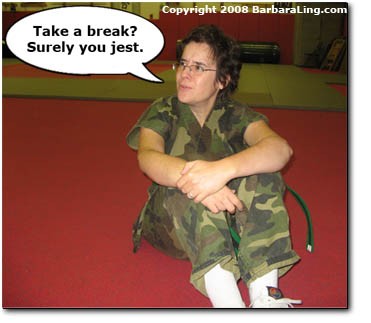 Yesterday, MamaBear had the spine-tingling excitement of attending the local Karate tournament and watching paint dry!

Well, no, I really didn't, but what should have taken perhaps, oh, say, 3 hours, ended up lasting until 8:10pm.

Given that I had gotten up at 2am yesterday morning, my oh my….that was *not* the epitomy of delightfulness at all!

Let me go on the record for saying the following.

Quite often, the final judging criteria generally ends up being, well, politics.

Be that as it may, I do understand how for kids, getting a nice shiny paperweight is quite the accomplishment.  Heck, HD2 and HS1 both have trophies from karate competitions in the past.

Thing is, though…karate is *not* about winning, nor is it about beating the political machinations that infect the Martial Arts tournaments.

Instead, it's about doing the best *you* can, it's about inner calmness and peace, it's about facing your fears and overcoming them…it's utterly awesome, actually.

As you can imagine, such views are rather dimly appreciated.  🙂

Anywhos!  At yesterday spine-tingling display of utter adult-stupidity, I saw two shining examples of the best and worst parenting imaginable.

The best was when a fellow student from my dojo was almost disqualified because he was using rubber nu-chaku.  Now, that was never mentioned before that it's "illegal", but the snarpy judge made the kid (single digits, I might add) stand at 'ready stance' for some time while complaints were made…and the kid told he wasn't using a 'real weapon' etc.

Said kid behaved respectfully, stayed in total control of himself, executed his kata and of course, didn't place whatsoever.

For a teen/adult, that's one thing….but for a grammar school child – wow!

Said kid didn't complain during the whole situation, as well.

In other words, said kid handled himself beautifully, which showed a really fantastic upbringing by both the parents and also by the senseis of the dojo to boot.

And what was the worst, I hear you ask?

The worst example of parenting was when one of the kumite kids (a girl who was perhaps 11 or 12 years old) inflicted several illegal manuevers on her opponent (spinning wheel kick, head shots, etc.).  Due to politics, she was not disqualified and the match was not stopped.  Sigh.  But also apparently, the girl said rather loudly to her opponent, "you're going to be so dead, bitch" prior to the match as well.

Call me naive, perhaps…but in a formal tournament, you act, well, formal.

In a street fight, you psych out your opponent any way you can.

I personally think the way kids behave at tournaments is derived a great deal from the messages the parents give them.

"Do the very best you can, and to hell with the politics"

"Don't worry Johnny, I'll beat up the judges so you get your trophy!"

And my favorite (from my senseis)….the

"Trophies make great shiny paperweights – the reason you attend is to do the very best for *you*."  (Have I mentioned how much I love and adore my senseis, btw?  They're beyond awesome!)

But remember…whatever attitude the kids show….it's virtually guaranteed they got it from their parents and senseis.

So make sure you're aware of the message you're sending to *your* kids.  It will manifest itself in ways you never imagined.

Today's Molly was drawn by HD1 – I was at the karate tournament yesterday and let me tell you, I've seen more exciting adventures regarding paint drying in comparison.

So…I asked HD1 to amuse me with her take on Molly Muffin.  The below is her response.  🙂

Yes, that's me up there, sleeping on the bleachers still holding my camera.  🙂