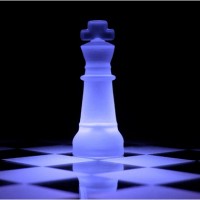 Ever watch your kids fail?

It sure is tough indeed!

But one thing I've learned…is that if I make life easy for my children, they never learn to deal with failure's despair….and turn that into a future success.

I was reminded of this ya few days ago when I heard HS1 and HS2 play chess in the far distance (ie, their office).  As usual, the game started nice and quietly…and continued that way for a blessed minute or two.  I started counting down in my mind….and then it happened.

You see, HS2 has decided he wants to play chess and asks everyone for a chance.  I generally refuse, as I hate playing chess with someone who possesses the skills of a newborn wombat.

So after hearing the lovely pinging sounds of angst and agony, I reminded HS2 that until he plays for a long time, everyone *will* beat him, and if he lets his inner Whiny Boy take over, *nobody* will want to torture themselves by playing against him.

Silence reigned again for a bit.

And then HS2 came over and begged me for a game.

I warned him, it would be quick, and he said, okay!

Making him sad again….but this time…..

He restrained his temper.

I always tell him that I play to win.  I can choose to do this, mind you, because quite actually, I'm a lousy chess player and have no real feel for the game.

Thus, it should be only a time before he *can* beat me.

Now, I've dealt with parents whose kids tantrum when they lose, so said parents make sure their kids win every time.

That the world will change its perspective if you yell and scream enough?

Not in my family.

The upshot of this was recently when I was out with the husband, I received a phone call from HS2.  And he told me,

A win, I might add….that he had honestly earned.

I'll guarantee you…he'll never forget how terrific he felt, knowing that he chose *not* to give up and eventually, *did* succeed in chess.

That's a pricess experience you just cannot *give* to a child – they have to earn it instead.

Thus, when you're tempted to make life easier for your kids, ask yourself.

Don't they deserve to witness the joy of succeeding by their own efforts?