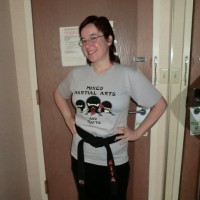 Yes indeed, MamaBear managed to rouse her several-centuries of wisdom and existence and survive from Friday afternoon until Sunday afternoon….

Now, I'm sure you're all wondering what the highlight of that gala event was.

Wonder no more, gentle reader, here it is!

Yes, on the last day of the convention, we dined at the hotel breakfast buffet and the waitress thoughtfully poured HD1 and HD2 coffee.

Being the magnificent mother that I am, I bravely offered to consume them myself.

The convention itself…well, let's now take a trip down memory lane, shall we?

Notice how I'm taller than everyone!

And I still tower over everyone!

Notice the ninja collar and leash dangling by my belt!

And finally, 2011 – notice the most important thingee!

See the glorious 3 cups of coffee?  🙂

People dress up most magnificently at the convention:

And many profound discoveries are made!

I love that particular artist – it was seeing this display last year that intrigued me enough to learn how to bead and make this:

So what's my take as a mom for the 2011 AnimeNext Convention?

HD1 and HD2 had a blast!  Our fellow kendo students showed up as well, so they were able to pal around, plus they attended various and sundry panels including one for Hetalia, one for for Color Theory and making a webcomic, etc.

There *was*, however, several highlights for me!

One was seeing a great colleague from 20 years ago; that was really nice.

And the other was coming across…..THIS.

So all in all…it was a fantastic time indeed.

And it's time to return to work!