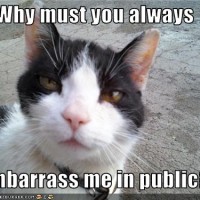 My gosh,  it would be sooo much easier if I could simply decree to my cubs, thou shalt read my mind, do what I want, and obey me unquestioningly without fail.

Alas, life…it just doesn't woik that way!  And not only did I sure as heck find that out this afternoon…but I also realized that I was wrong as well.

I know, I know…the horrors!

Still, though, I hope never go grow sooo old and set in me ways that I cannot learn and evolve meself.

It was a bright sunny day, and HS2 was scheduled to have a playdate at the local park.

I enjoy talking with the mom, and for 2.5 hours, life was sweetness and light and fluffy unicorns bouncing across the verdant grassy plains (alright, the kids had a blast at the playground.  🙂  )

Now, HS2 is almost a good head higher than his friend, and at the very end of the playdate, they said goodbye and he held her hand 'way over her head.

I figured, hmmm, HS2 doesn't realize his own strength, and took hold of his ear without twisting/etc., figuring that he'd realize, ahah!  I should perhaps not be doing this!

Okay okay, hope springs eternal and all that jazz!  That sure didn't work at all; instead, he pulled an attitude on me, pretended to be in great pain, said, Mom, why did you doooo that to me, and walked off.

Mental note to my kids – walking away from Mom after she just allowed you a great playdate for 2.5 hours is less intelligent than diving into a pool of molasses and thinking you'll emerge squeaky-clean.

So, after saying goodbye, I walked after HS2, told him, you walked away from me, I am *not* dealing with you, and stalked to the car, with him trailing after me.

At this moment, you might imagine…I was smoldering kinda sorta like a volcano from the pits of Hell (minus the marshmallows, of course).  However, as is my habit, I simply spoke in extremely quiet tones to HS2, told him he embarrassed me horribly, and my gosh, that was no way to treat me at all.

But after we got home…..and he got control of himself…and I chose to be receptive as well, he wrote down what was going thru his 9 year old mind.

And what it was….it never even was a consideration to me.

You see, HS2 was embarrassed by me correcting him in public.

And he chose to imitate a black hole because of this minor fact.

When he told me this, I stepped back and really thought about it.

Holding ears worked really well for my cubs when they were younger, but indeed…I really *should* be able to verbally cue HS2 when he might not be aware of his strength/etc.

In other words, I totally was wrong.

But if he hadn't chosen to explain his feelings to me, I'd never have realized from where *he* was coming as well.

Talk about a teaching moment for both of us!

HS2 and I then talk about what, what should I do if I feel the need to correct him in public?

He suggested that I combine both, ie, get his attention *and* pull him aside to talk quietly with him.

And I think that's a perfectly reasonable request indeed!

So, the moral of the story is:

Whenever difficulties flair between you and your kids in public, do *not* automatically assume you know or understand the driving causes.

Instead, make sure to get the communications moving!

That way, neither of you will embarrass the other.  It will help for smoother sailing in the future, I guarantee it.