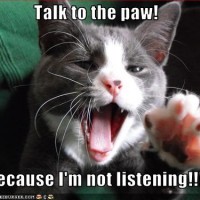 It's the Memorial Day weekend!

And that means it's time for yet another episode of that exciting show,

"How can we misunderstand and unfairly take offense at our siblings today?"

Yes indeed, while other families are enjoying exciting BBQs outside and opening their pools, MamaBear's cubs realized they could either get along and play nicely, or choose to misunderstand and imitate Godzilla discovering that his latest diet precluded Tokyo.

The choice, gentle reader, was obvious.

So there I was at my computer!

I was happily explaining to HD1 how to add thumbnails to WordPress homepages (it's really easy to do, I wrote a tutorial about it over at How To Easily Make A Glorious WordPress Homepage Complete With Thumbnail Post Images ) when all of a sudden…

A sullen chill pervaded the air….

"Ummm, Mom, I think that's HS2 currently sounding like a broken chalk-board record in your room…."

And by golly, he was!  Losing not a moment, I first donned on my stylish SuperMamaBear Hero's cape and flew to my bedroom, where I was brought up starkly by the scenario that met my eye.

It was frightening enough to daunt the most stalwart of souls!

Yes indeed, HS2 was sprawled on the floor, crying his heart out, incredibly mad at HS1!

And HS1, that stoic soul who was born minus the compassion gene but recently has been making leaps and bounds worthy of Superman to fix that, was curled up in a ball of misunderstood misery on my bed.

What had happened, I wondered?

Whatever could it be??

Turns out, both boys were playing on the bed and HS1's push to HS2 pushed him off of said bed, where HS2 bonked his head.

But things rapidly went downhill faster than 8,382 fresh ripe tomatoes can decay in one's school lunchbag when HS1 immediately ran over to HS2, said "Are you okay?" and HS2 screamed at him, "WHY DO YOU ALWAYS ASK THAT?  I'M HUUUUURRRRTTTTTT, WAAAAAHHHHHH!"

Oh the drama….if only Hollywood would make a reality TV show about my family!

Gentle reader, let me pause in this dramatic narrative and ask you the following.

If you were hurt, and someone asked if you were alright, would you focus upon:

It turns out that HS1 was trying to comfort HS2 the best way he knew how.  But because HS2 is far more literal minded than HS1, he focused instead on the actual words themselves…instead of his brother's desire to make him feel better.

So….HS1 was basically punished by his brother for not making him feel better in the *right* way.

Which of course…is no way to run a family!

After a big long huge never-ending soul-searing dramatically agonizing talk, I managed to get both boys understanding that they were both there for one another…but neither would look beyond their own personal feelings to see the goodness that was driving the other.

And as is MamaBear's habit, she had them both write down what happened, what they learned, and what will occur in the future.

I asked HS2, “Are you ok?” and he began yelling like, “OMG OMG OMG!!” Apparently, he enjoys me not to ask the specific question, but, “Would you like some help?” would work. I think he would be more exuberant than because he enjoys that interpretation better. He probably enjoys that interpretation better because it’s obvious he’s really hurting. I will make sure to be more careful in the future.

I felt sort of annoyed by the fact HS2 would just yell when I tried to comfort him. HS2 probably felt, “OMG I’M OBVIOUSLY NOT OK SO LIKE OMG” I now completely understand why HS2 reacted this way. I thought he was just yelling for the sake of me causing the accident. I’ll look for clues next time for what to say.

Finally, we resolved this problem with what to say and when. I’m supposed to say, “Are you okay?” when it’s bleeding only slightly, and he’s still in his position before. If it’s a major cut (ex. Crying, bleeding, crippling etc) I should say, “Would you like some help?” I hope this solves all problems with him angry at me for these reasons. I now know what to say and when, so by another shard, were one step closer to the portrait of a wonderful family.

Have you ever have done 3 paragraphs? Have you thought it was a punishment? Well it is a learning concept. So I did one this morning. So I am going to explain what I did.

So First the beginning paragraph should be what you did.

First I got pushed of a bed. My brother said are you ok? I was  like WHAT DOES IT LOOK LIKE! It was really wrong. So I was very hurt.

So the second paragraph should be why you did it.

Second I yelled because because he asks are you ok everyday?. It gets annoying every once and a while. So i did it because it didn't look like I was ok. I was like screaming because I was really hurt.That is why.

The third paragraph is what you will do in the future.

In the future I will not yell. I wouldn't yell because HS1 is only trying to be nice. Also it could really hurt someones feelings. Also I would just say yes if he forgets not to say are you ok? I will never do that again.

So just remember people 3 paragraphs is not a punishment it is a learning concept. So bye!

As you can tell, HS2 still focuses bunches on his own personal feelings, while HS1 is getting much better at understanding other people's feelings as well.  Still, though, it's definitely a Very Good Beginning indeed!

Is the day over yet?

This really highlighted that it doesn't matter how much empathy you have or how much you want to take care of someone…if they refuse to listen to your words.

Thus, the 3 Can't Fail Techniques to Compel Your Children To Actually UNDERSTAND One Another are as follows.

Step 1.)  Emphasize to your kids to listen to the actions that drive their sibling's words.

It could be that the way they want to help is not received as expected.  So, do not dwell on the actual words if offense is generating….instead, look beyond those words to the actions they compel.

Step 2.)  If misunderstandings do occur, praise both kids for trying to communicate, and then get to the root of what went wrong where.

The fact is, both kids involved need to have their feelings validated.

You don't have to agree with them, mind you, but you do have to let them feel they've been heard.

So tell them they did well in trying to get their point across, and then ask them, what was going through their minds when the blow-up occurred?

Step 3.)  Work on discovering a better approach for the future.

Knowing what went wrong where is a good start…but it's useless unless your kids learn from it in the future.

Thus, talk out with your kids what they think would work better should the issue happen again.

Thing is, though, knowing HS1…chances are, it will take lots of repetition before it sinks in.

So, HS2 needs to listen to the actions *first* before taking offense at the words.

And that's something that will take time as well.

And that's what the Mama Bear parenting method is all about.  We are always open to trying new things to foster better communications within the family.