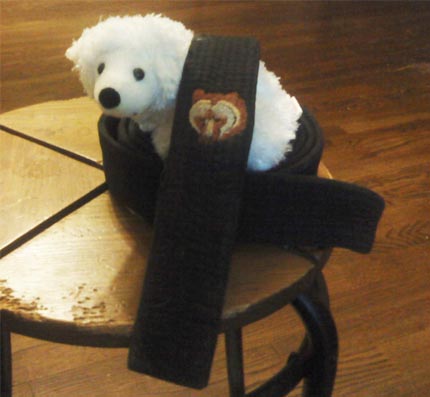 Today MamaBear got blindsided by Honorable Boy #2's continuing lack of self-confidence…and turned on a dime to deal with it.

It all started when Honorable Boy #2 casually left his plastic strings scattered about on the kitchen floor.

Now, it's true that MamaBear was *not* born with the neatness gene (compared to her husband, whose office floor could double for an open-heart surgery table).

And it's also true that all 4 of MB's kids look at neatness as something of an oversight.

Be that as it may, MamaBear does enforce standards whenever possible.

So!  MamaBear saw the mess HB2 left…and called him back to clean it up.

He picked up 2 strings and left.

He picked up 1 more string…and left.

Callback #3 happened, and this time…MamaBear had a *very* strong talk about responsibilities, did HB2 want to live in the garage or under a tree, and if he knew what was good for him, he'd make the kitchen floor sparkle by the time she got back from dropping off his siblings to school.

MamaBear then packed HD1 and HD2 into the MooseMobile and drove off to school.  While driving, however, Honorable Son #1 (otherwise known as HB1), called up and said,

"Mom, HB2 is sitting on the floor crying; he thinks he can never do anything right.  I calmed him down and made him feel better, but could you talk to him on the phone?"

So MamaBear did, and told HB2:

"Okay, listen.  Yep, you're going thru a tough time in life, but never forget!  I will *always* and *forever* believe in you!  And if I was a lousy mother, I'd just brush it off, but you know you have *have* to learn.  Yes, it hurts, and yes, it's painful, but guess what!  Your siblings outgrew their tendencies for daily mistakes, and so will you. I promise you that."

That was received very well, but while driving back home, MB realized that she had to give HB2 something to remind him that she's always in his heart….even if she's physically not there.

After returning home, MamaBear went to her karate bag and took out her favorite MamaBear guardian plushie (the one shown above).

This particular plushie was deeply rooted in MB's heart; back when she started karate, she had her own guardian angel wolfie plushie stored in her karate sparring bag that watched over her every time she got beaten into the floor.

Then one of her friends needed a reminder of their personal greatness, so MamaBear gave her wolfie to that friend.  It was the right thing to do…but wow, she realized she needed a replacement to look after her.

That replacement was the snow-white polar bear that's been with her now for the past 2 years.

MamaBear called HB2 over to her, sat him down, showed him the MamaBear plushie and said:

"This guardian angel is now yours….so whenever you need to be reminded that I'm always in your heart, you have to just look at this plushie and….remember."

HB2's eyes could have lit up the Empire State Building, let me tell you!

The moral of the story is that even if your child shows self-confidence when with you….there might be times and places where horrible self-doubts creep in.

And that's why you need to give your children something of *you* to keep close by themselves during times of thick and thin.

A physical reminder, something they can cuddle to their hearts…its value simply cannot be underestimated.

So, if your children need a reminder of your utter belief and love in them, consider giving them a plushie that represents *you*.

And that's a memory that will last a lifetime, y'know?