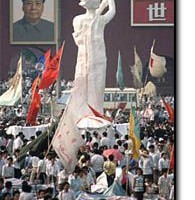 A moment of silence please….

Today is the 22nd year anniversary of the Tiananmen Square Massacre that happened on June 4th, 1989.

It saddens MamaBear, it really does, when she talks to asian kids in their teens and twenties and realizes, their parents never took the time to teach them about this rather dark episode so many years ago.

It must never be forgotten.

When it happened, I was a data analyst over at the Huge Telecommunications Company that created awesome water towers in the shape of transistors.  The vast majority of our group was Asian, so for me…Tiananmen Square wasn't simply what you heard on the news…it was what you talked about during every free moment that emerged.

…The Tiananmen Square protests of 1989, widely known as the Tiananmen Square Massacre, in China referred to as the June Fourth Incident to avoid confusion with the two other Tiananmen Square protests, were a series of demonstrations led by labor activists, students, and intellectuals in the People's Republic of China (PRC) between April 15 and June 4, 1989. While the protests lacked a unified cause or leadership, participants were generally against the authoritarianism and economic policies of the ruling Chinese Communist Party and voiced calls for democratic reform within the structure of the government. The demonstrations centered on Tiananmen Square in Beijing, but large-scale protests also occurred in cities throughout China, including Shanghai, which stayed peaceful throughout the protests. In Beijing, the resulting military crackdown on the protesters by the PRC government left many civilians dead or injured. The reported tolls ranged from 200–300 (PRC government figures), to 300–800 (The New York Times), and to 2,000–3,000 (Chinese student associations and Chinese Red Cross).

Following the violence, the government conducted widespread arrests to suppress protesters and their supporters, cracked down on other protests around China, banned the foreign press from the country and strictly controlled coverage of the events in the PRC press. Members of the Party who had publicly sympathized with the protesters were purged, with several high-ranking members placed under house arrest, such as General Secretary Zhao Ziyang. The violent suppression of the Tiananmen Square protest caused widespread international condemnation of the PRC government ….MORE….

Now, you have to remember that back then, the Internet wasn't at all what you see today.

The most popular social networking groups was Usenet, the scattered collection of thousands of special interest groups that used the Netnews protocol.  There was no:

ie, there was nothing even *remotely* resembling what we have today.

But…there WAS soc.culture.china.  And within that group, messages were posted daily that brought the fledgling hope of democracy face-first to the readers…and then the utter horror and tragedy that followed after the government brutally cracked down and massacred the students.

Prior to news being cut off, we watched on TV the following footage of one individual stopping a tank:

And here's a compilation as well.

Thanks to the wonders of the Internet, you can read those messages that were sent 22 years ago over at

Remembering it now…breaks my heart.

You can learn more about Tiananmen Square at

And for lesson plans, check out:

In hindsight, my mother was most insightful about the whole tragedy; the Chinese government waited until they *knew* who the student ringleaders where…and then moved into crush them entirely.

Good military planning and execution on their part….

Take some time today to remember those brave yet naive Chinese students who actually thought they could compel those in power…to give in…and teach your children about them as well.

I certainly am.  Tiananmen Square must never be forgotten.