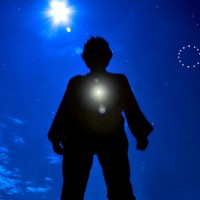 It comes in many forms.

And MamaBear has recently internalized (kinda sorta like a neutron bomb can internalize a wee bit of devastating power) that quite often, people are afraid to give themselves permission to face reality….the way it really is.

It happened during this today's Camp Ling morning jog.  Every other day, I rouse the kids at 5:45am, we pack the moosies into the MooseMobile, and we venture to a town park where the kids jog the outfield 10 times, the mooses rocket all over the place, and yours truly contents herself with various kicks and other easy workout thingees.

There's no picture of HS2.

Why, I hear you ask?

Because HS2 believes he's lousy at running…and so, offered up an effort similar to that described by fossilized clams on a stationary bike.

I chose to simply watch…and plan my reaction.

When the 3 were done with the 10 laps, I called over HS2 and told him, he had to run 100% of another lap, and that if he stopped, he'd run again and again until he succeeded.

Amazingly, *that* lap was run….beautifully.

No problem at all!

So why couldn't he have done that with everyone else?

It was a mystery I was determined to solve.

After HS2 came back, I asked him the above.  And he said, "Mom, I'm really bad at running and I just feel embarrassed.  It's really hard for me!"

I had two choices for reactions.  My favorite one (which would have been me saying, "Man up, cupcake, and stop whining!"), alas, had to remain a fantasy for me.  🙂

This is what I told him instead.

"HS2, you just ran that last lap with no problems at all.

But when you tell yourself, I can't do it, you lose hope and courage.  And you *do* have courage within you; we all do.

'Matter of fact, everyone has their own:

And only *you* can give yourself permission to let your inner hero out where he can shine.

So when you say, I cannot do this!, you're letting your inner coward control you.  Is that what you want?  Don't you deserve better?  I sure think you do…and I think you should always give your inner hero a fighting chance to help you succeed."

The above was received very well indeed.

Which brings me to the point of this post.

Always encourage your children to recognize their inner heros too!

The plain fact is, we will not always be around to prop up our kids when they need it.  They might be besieged with doubts at school, with their friends….some place where us MamaBear parents are *not* able to give great verbal encouragement.

This is where letting one's inner hero shine….can make the difference between success and failure.

Every child is capable of greatness, and every child can glitter more brightly than the stars.

But only…if they allow their inner heros to shine.

Thus, sit your kids down the next time you see them, and have a talk about their inner heros.

And let them know the following.

You believe in their greatness.

It should definitely bolster their confidence beyond imagining.